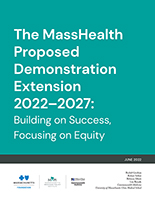 Massachusetts administers much of MassHealth through an 1115 Demonstration waiver, approved by the Centers for Medicare and Medicaid Services (CMS), which it has extended several times since it was originally approved in 1995. In December 2021, Massachusetts submitted a request to CMS to extend its Demonstration for another five years. While this request largely aims to continue and improve upon the programs and initiatives that are a part of the current Demonstration, an area of specific focus within the proposed extension centers around advancing health equity within the MassHealth program. As part of this request, MassHealth seeks to promote health equity by both building on current program elements and introducing new strategies such as investing in certain populations that experience persistent health inequities and creating incentives for ACOs and hospitals to measure and reduce health inequities.

This report describes the proposed MassHealth Demonstration extension, what it means for MassHealth coverage moving forward, and implications for members, providers, and other stakeholders.