Medicaid, a federal-state partnership program, has advanced a variety of both federal and state health coverage reform goals over the last 50 years. There is perhaps no state in which Medicaid has played a more important role in the evolution of how health care is delivered and paid for than Massachusetts. This interactive timeline reflects some of the key moments in our history where Medicaid served to expand coverage for low-income and vulnerable people in the Commonwealth. 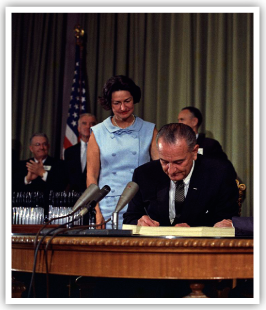 Creation of Medicare and Medicaid 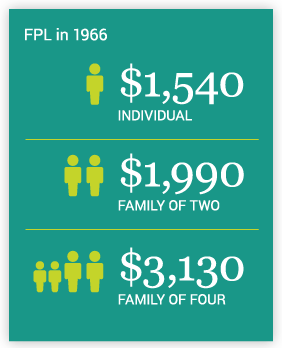 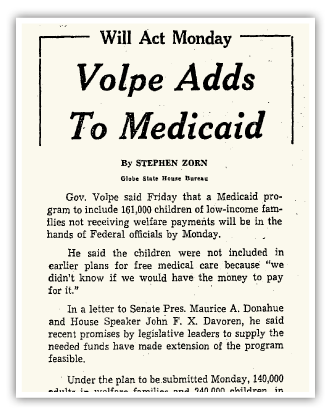 Mass. Medicaid Expands to Cover Those on Supplemental Security Income

The Social Security Amendment of 1972 establishes the Supplemental Security Income (SSI) program. Massachusetts is one of 35 states that choose to make all SSI recipients eligible for Medicaid. 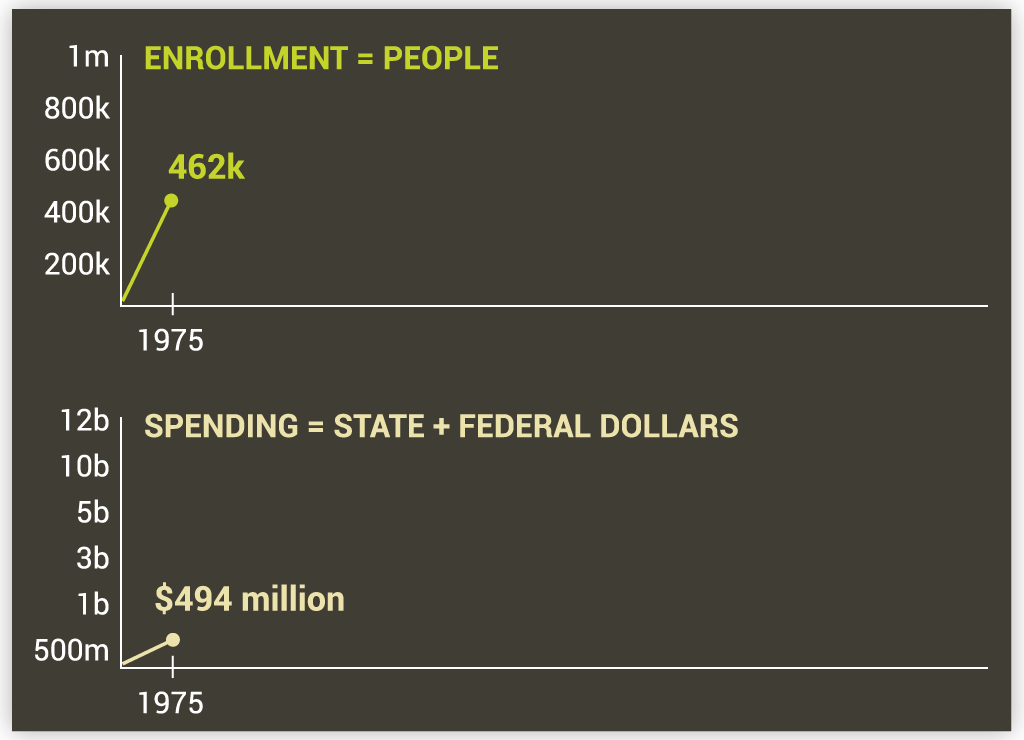 Personal Care Attendants Are Recognized as Providing an Essential Service

Massachusetts implements a program that provides funds for Medicaid members with physical disabilities to hire personal care attendants (PCAs). The assistance that PCAs provide helps support the independence of people with disabilities and can be critical to their ability to live in the community. Today, more than 27,000 people in Massachusetts are assisted by PCAs. 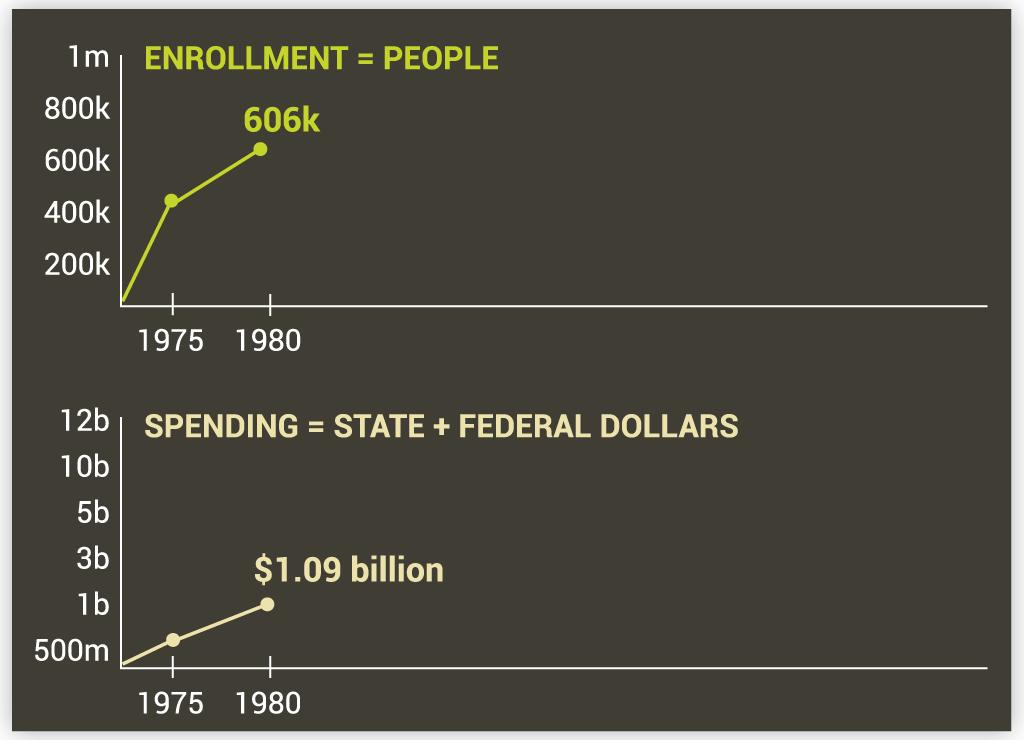 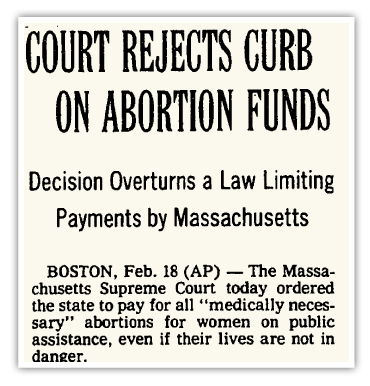 Under Moe v. Secretary of Administration and Finance the Mass. Supreme Judicial Court rules that the state constitution requires payment for lawful, medically necessary abortion services provided to Medicaid-eligible women, declaring that the state cannot infringe on “the exercise of a fundamental right” when subsidizing medical care.

The Home and Community Based Services (HCBS) waiver program was created under the 1981 federal Omnibus Budget Reconciliation Act. Massachusetts's first HCBS waiver request is approved in 1985, allowing the state to provide home- and community-based long-term services and supports to residents who would otherwise require institutional care. As of 2015, Massachusetts operates 10 HCBS waiver programs for populations including frail elders, adults with intellectual disabilities, adults with brain injuries, adults with physical disabilities who are moving from a facility back to the community, and children with autism.

Massachusetts Expands Coverage for the Aged and Disabled

Massachusetts adopts the Medicaid option allowed under the Omnibus Budget Reconciliation Act of 1986 (OBRA 1986), electing to provide the coverage at the maximum income level allowed under federal law for older people and people with disabilities with incomes up to 100 percent of the federal poverty level, even if that income exceeds Supplemental Security Income (SSI) levels. 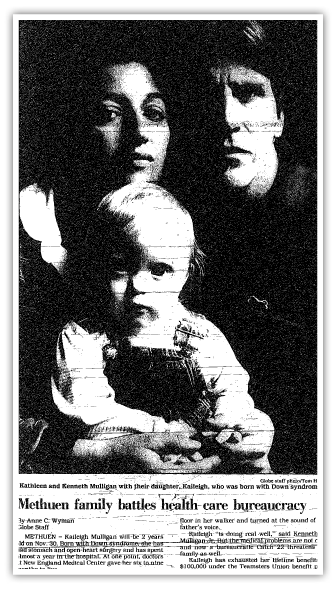 Massachusetts adopts the Medicaid option allowed under the Omnibus Budget Reconciliation Act of 1987 (OBRA 1987), expanding Medicaid coverage to include pregnant women and children under age 1 if their income is below 185 percent of the federal poverty level. 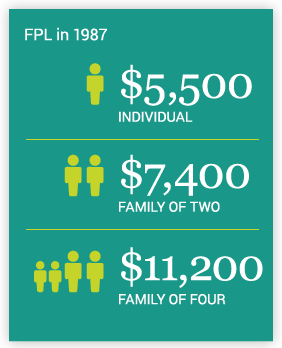 Massachusetts adopts the Kaileigh Mulligan waiver (enabled by the 1982 federal Katie Beckett waiver), allowing Medicaid to provide long-term services and supports to children in their own homes in lieu of institutional care, if they have institutional-level medical needs. This coverage option is available to families of any income or asset level, so long as the cost of care at home is not greater than the cost of care would have been in an institution.

On April 21, Governor Michael Dukakis signs the Health Security Act. The law aims to provide basic health care coverage to all state residents by 1992. Parts of the law were never implemented, including the so-called “employer mandate,” but important state-funded health coverage programs were preserved, including CommonHealth, Healthy Start, and the Medical Security Plan (all of which become part of the MassHealth Section 1115 Research and Demonstration waiver with federal matching funds in 1997). In addition, the law includes a provision referred to as "Welfare-to-Work," which extends Medicaid coverage for up to two years for former welfare recipients.

Massachusetts receives a federal 1915(b) waiver to require managed care enrollment for certain populations. This leads to the creation of the state-run Primary Care Clinician (PCC) Plan and its companion statewide behavioral health managed care plan. New “diversionary” behavioral health services are made available, expanding the range of service options to support care in community settings. Beginning in July 1992, 375,000 disabled and nondisabled Medicaid recipients enroll in the PCC Plan.

Medicaid separates from the state Department of Public Welfare and is administered by the Division of Medical Assistance (DMA) which is established when the legislature passes a reorganization bill filed by the Weld Administration. 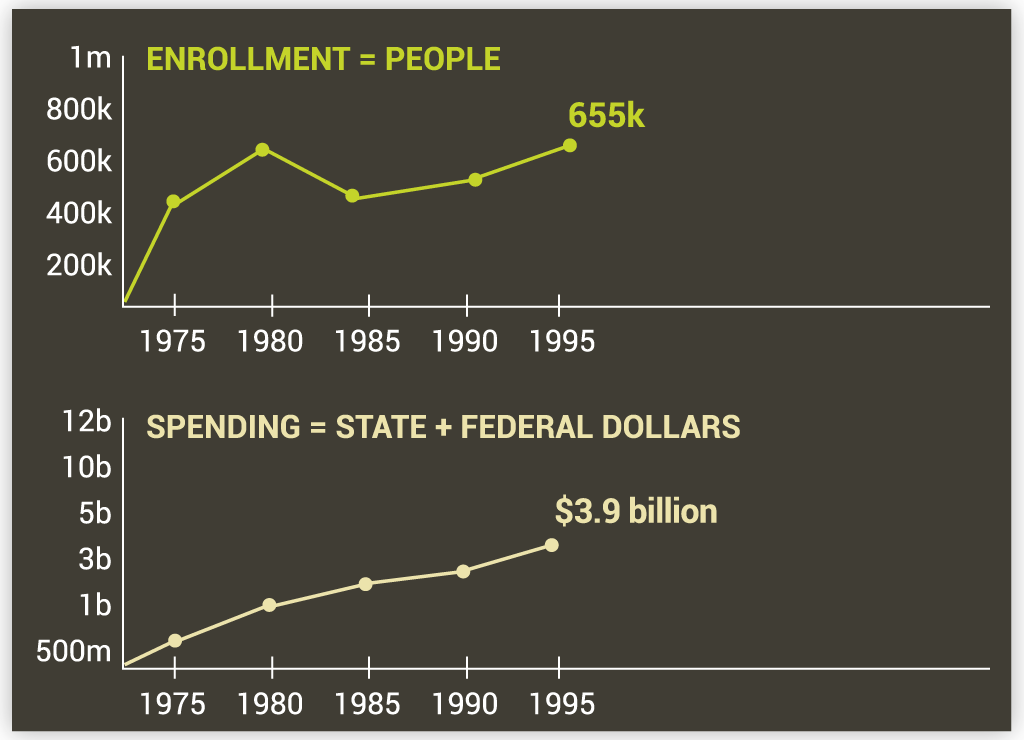 Massachusetts submits a request for federal approval of a Section 1115 Research and Demonstration Waiver to expand coverage and create cost efficiencies in the state’s Medicaid program. This is granted federal approval in 1995 and implemented in 1997. 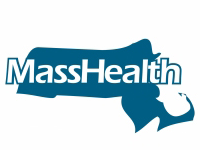 The Personal Responsibility and Work Opportunity Reconciliation Act (PRWORA), also known as “welfare reform,” delinks Medicaid from the Aid to Families with Dependent Children (AFDC) program, which is replaced by Temporary Assistance to Needy Families (TANF), a state block grant. PRWORA also bars states from using federal Medicaid funds to pay for non-emergency services provided to legal immigrants who have been in the country less than five years. As a result of this federal decision, Medicaid coverage for legal immigrants who have been in the country for less than five years must be entirely state-funded. Since then, Mass. policies and funding of health coverage for these legal immigrants have varied over time.

Implementation of the Section 1115 Demonstration Waiver Expands Coverage by 300,000

The Section 1115 Research and Demonstration waiver expands coverage, making about 300,000 Mass. residents newly eligible for MassHealth. Eligibility for children is expanded, and new eligibility categories are created for long-term unemployed adults, people with HIV, and low-income employees of certain small businesses. It also requires managed care for most members under age 65 and authorizes supplemental payments to safety net hospitals and their managed care organizations (MCOs), newly created by Boston Medical Center and Cambridge Health Alliance. This waiver, which has been modified through amendments and multiple reauthorization extensions, continues to govern much of MassHealth today. For more information on the 1115 Research and Demonstration waiver, click here.

On May 28, the federal government approves Massachusetts's State Children’s Health Insurance Program (SCHIP). Approximately 47,000 children are enrolled in SCHIP within a year. To learn more about SCHIP, click here and here. 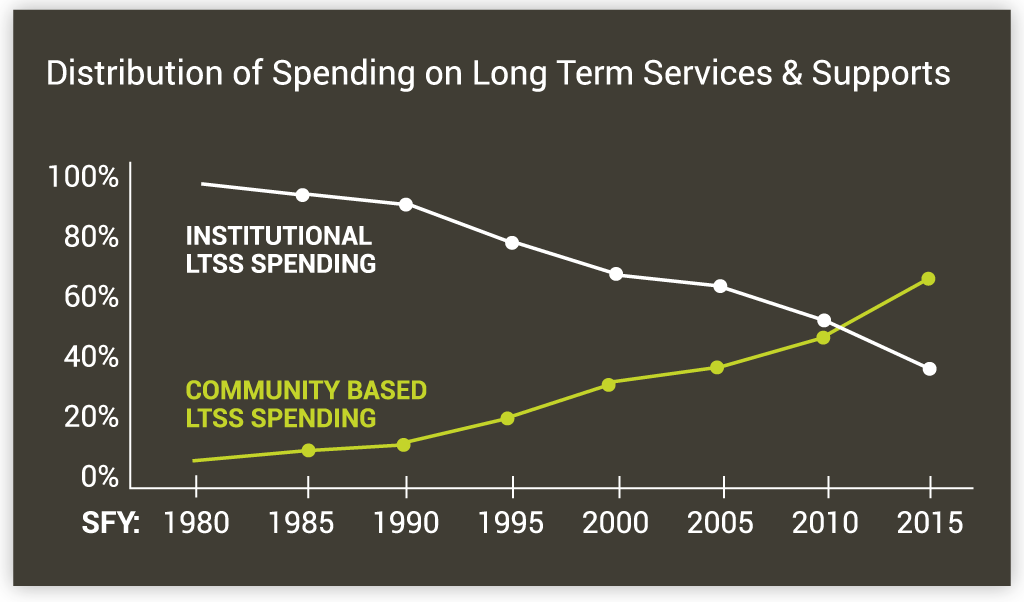 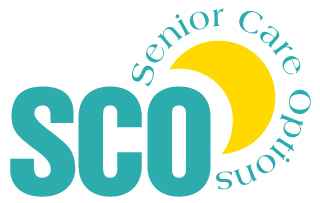 After federal approval for the program is granted to Massachusetts, the Mass. legislature authorizes the start of the Senior Care Options program, providing comprehensive and integrated managed care to individuals aged 65 and older and receiving both Medicare and MassHealth benefits (often called dually eligible). The program begins enrolling members in 2004.

In February, Massachusetts is one of the first states to adopt the Ticket to Work and Self-Sufficiency Program which extends Medicaid coverage, after payment of an income-related premium, to working disabled individuals with incomes above 250 percent of the Federal Poverty Level.

In July 2003, the Division of Medical Assistance is disbanded and the Title XIX (Medicaid) and Title XXI (Children’s Health Insurance Program) programs are administered by the new Office of Medicaid placed within the Executive Office of Health and Human Services (EOHHS).

Treatment for Women with Breast or Cervical Cancer Is Covered

Massachusetts expands MassHealth coverage to qualified women with breast or cervical cancer with incomes up to 250 percent of the federal poverty level under the newly created MassHealth Breast and Cervical Cancer Treatment Program. This Medicaid expansion option was made possible through the passage of the federal Breast and Cervical Cancer Treatment and Prevention Act of 2000. (Prior to this law, federal Medicaid funding covered screening but did not cover treatment costs for those who screened positive.)

Massachusetts creates a Safety Net Care Pool (SNCP) under the second renewal of the state’s Section 1115 Research and Demonstration waiver extension, which was established for the purpose of reducing the rate of uninsurance in the state. The SNCP creates a structure for transforming supplemental payments to Boston Medical Center, Cambridge Health Alliance, and their managed care organizations (MCOs) into subsidies to consumers for insurance coverage, laying the groundwork for comprehensive health care reform in 2006. 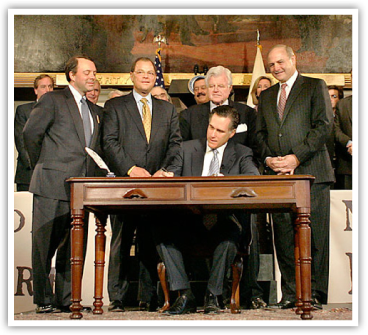 Mass. Healthcare Reform Bill (Chapter 58 of the Acts of 2006) Aims to Provide Near Universal Coverage

Governor Mitt Romney signs the Mass. Healthcare Reform Bill (Chapter 58 of the Acts of 2006) into law on April 12, enacting comprehensive health reform aimed at providing affordable high-quality health insurance coverage to nearly all Mass. residents. Many key features of the law—such as the individual mandate, receipt of subsidies through a state-based health insurance marketplace, and employer "fair share" contributions — are later incorporated into the Affordable Care Act. To learn more about Chapter 58, click here.

Under the American Recovery and Reinvestment Act (ARRA) of 2009, the Federal Medical Assistance Percentages (FMAP) is increased in all states for 2009, 2010, and 2011. In Massachusetts, this yields an increase from 50 to 61.59 percent, resulting in additional federal revenue in excess of $3.5 billion over the three years. For more information on trends in federal revenues to support MassHealth, click here. 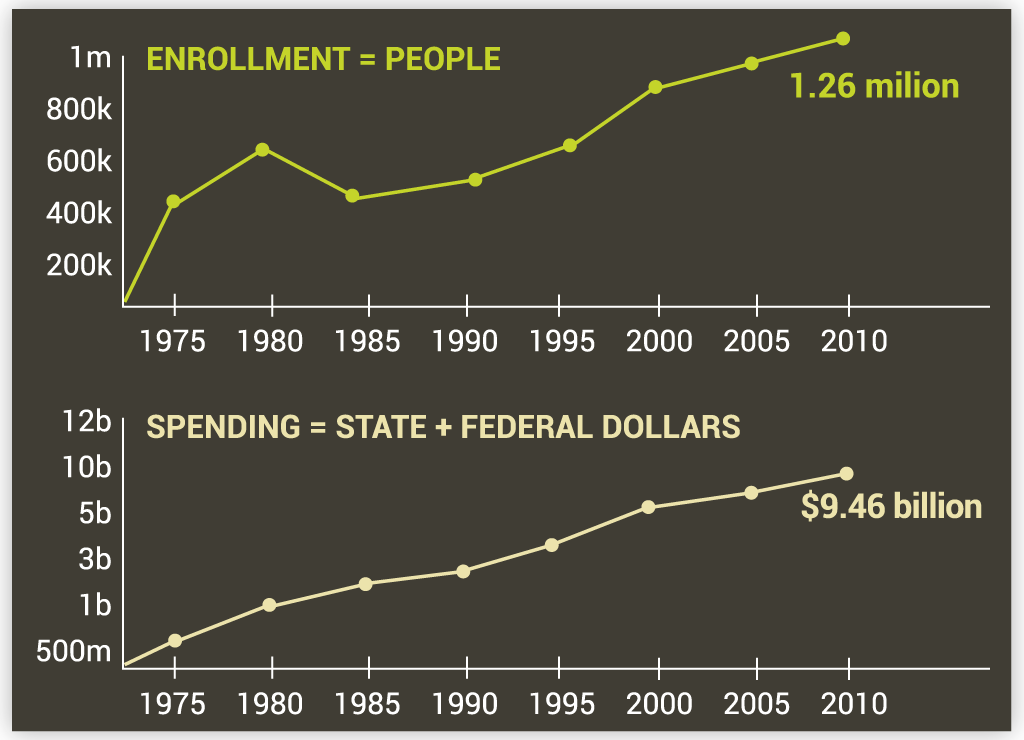 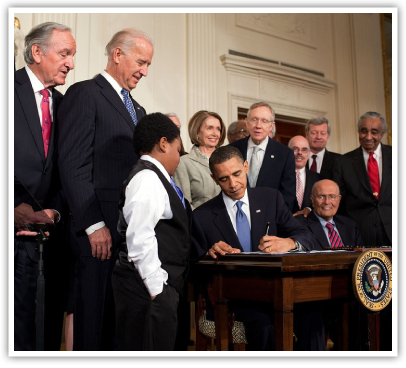 Building extensively on Chapter 58 and a key feature of the MassHealth Section 1115 Research and Demonstration waiver that extended coverage to most low-income adults, the federal Patient Protection and Affordable Care Act of 2010 (ACA) makes historic changes to Medicaid and the Children’s Health Insurance Program (CHIP). The ACA expands mandatory coverage under the Medicaid program to all individuals with incomes up to 133 percent of the federal poverty level, and as a result, more Mass. residents qualify for MassHealth. The ACA also enhances the federal match Massachusetts receives for state spending for certain Medicaid populations. To learn more about how the ACA affected Massachusetts click here and here.

The Section 1115 Research and Demonstration waiver is renewed until 2014 and introduces the Delivery System Transformation Initiative (DSTI) to provide additional financial support to seven safety net hospitals to implement projects aimed at enhancing patient access, improving quality of care, and supporting the development of payment reform strategies and models.

Twenty-six states challenge the Affordable Care Act’s Medicaid expansion provisions in National Federation of Independent Business (NFIB) vs. Sebelius. Massachusetts files an amicus (“friend of the court”) brief in the Supreme Court with 12 other states, supporting the ACA. 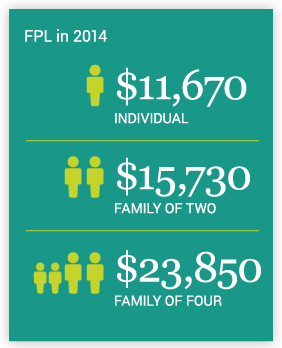 Massachusetts implements the ACA, which includes the creation of MassHealth CarePlus for newly eligible members with incomes at or below 133 percent of the federal poverty level.